We've all heard stories about interesting and frightening electrical installations from people who have travelled to Mexico. From my own experience, my favorite is from my last R.V. trip to Mazatlan, some 20 years ago. The 15A R.V. service to our campsite consisted of a duplex receptacle nailed to a palm tree (no box of course, just the receptacle), with a single black wire coming out of the sand, attached to the hot side, another white wire out of the sand attached to the neutral side (kudos for correct polarity), and then a bare wire from the ground terminal was connected to a metal coat hanger, pushed down in to the sand. Nice! I wish I still had the picture of that!
My sister and brother-in-law tell of a ceiling fan installation in one room they stayed in several years ago. It was hanging by the wires only, no mounting screws whatsoever. When you turned the fan on, it would twist the wires up tight , and then slowly unravel as the fan picked up speed, wobbling wildly around the room. Not sure if this is more funny than dangerous, or vise-versa. Needless to say, they requested a repair, but that didn't happen in the time they spent there, so they just left it off.
With this trip through Mexico, I've noticed that for the most part, things have slowly improved over the years. It's truly amazing that more people aren't injured or killed by installations such as this.
On our way back north from Bucerias, we stopped to visit some friends, Del and Angel, who are staying near San Blas. They have decided to stay year round, and had a palapa built to park their R.V. under. Del wanted me to check to see if the electrical service was sufficient to serve his needs. Well, I didn't want to be the bearer of bad news, but this installation was BAD NEWS! At first glance things didn't look too bad. An indoor panel was installed , with two receptacles mounted underneath it, and fed by a 20 A and a 15A breaker. The power source came in with a piece of plastic water line, and individual conductors inside. I assume some kind of ground rod was buried because a wire attached to the panel ground lug went deep in to the sand. 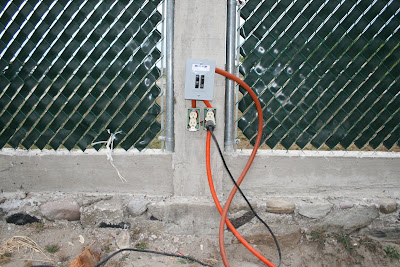 Upon further investigation, I found that they had only 2 conductors inside this plastic pipe, and the pipe ran over 300 ft. to the source. This is where it got interesting. It went up a palm tree, across the roof of a house on the property, and then spliced directly in to the service conductors that fed the house, upstream of the meter, and right off the utility power transformer with no over-current protection, other than the high voltage fuse links that protect the transformer on the pole. 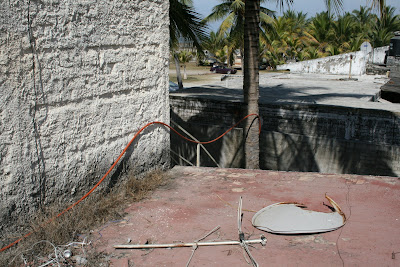 The wire was only #10, and only 120V supply, the same service as the house. Not only was this un-safe, but also illegal, even in Mexico. Splicing in ahead of the meter is theft. Not sure if the ignorance defense works in Mexico, but I know it doesn't in the rest of North America. 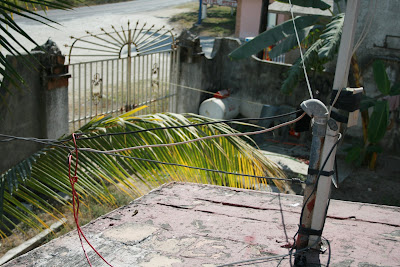 After informing Del that as he had suspected, this was NOT adequate for his needs, he asked that I provide him some direction and advise. This is where it gets tricky. How do you give advise on electrical installations in Mexico? How do you strike a balance between what is the correct way, what is the safe way, what materials are available, etc. All I could do was to show what the options were providing he could source out the correct materials, and advised him to do the best he could with what he had to work with. It turns out that the newly constructed motel on the property had a fairly modern electrical installation, so I suggested taking a new sub-service from there. Good luck Del, and I'll inspect it for you next fall!
Here are some pictures of other interesting mex-electrical installations I observed.
This is a receptacle, fed from the light fixture in the bathroom of the villa that my family rented while in Bucerias. It is mounted high in the corner of the SHOWER! The receptacle is for the air conditioner unit for one of the bedrooms. 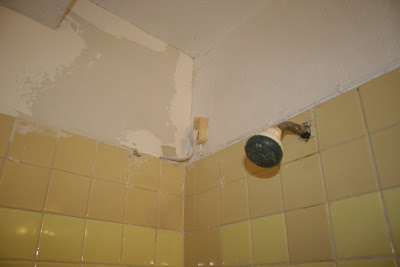 This picture shows the service conductors feeding power in to a villa in Bucerias. Note the meter at the left of the picture, with a mast that has been torn loose from its mounting straps. The conductors are sagged down to within about 4 feet of the sidewalk. To walk down the sidewalk and avoid the conductors you have to duck to one side or another, or push the wires out of your way with your hand. Luckily, Mexicans have a healthy respect for electricity, so most people just walk on the street to avoid this dangerous situation. Here is picture of an open meter socket for a service that has been up-graded or moved. However, this one is still connected to the utility power, so the open and exposed lugs on top are hot. Just the right level to be poked at by the curious hands of a child. 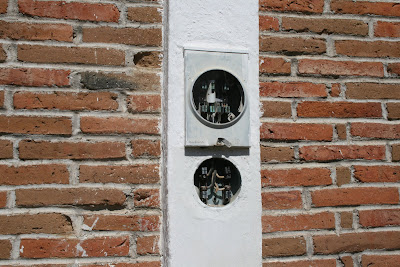 Here is a typical installation of an outdoor light fixture. Just a couple of wires coming out of the concrete, and a pig-tail lamp socket spiced on with electrical tape. Does the job I guess, and the price is right too! 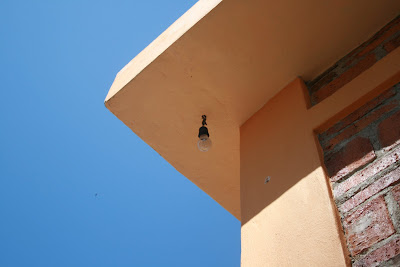 And now for my favorite. I'm dedicating this one to the boys from Fortis (utility power company) back home in Olds. Gary, Scott, Randy, what do you think of this innovative idea when you need some separation between phase A and phase C? Just tie on a water bottle full of sand to make the line sag a bit more. The more separation required, just hang a bigger bottle with more sand! Genius! 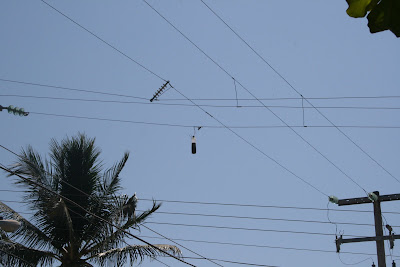 If you have some interesting stories, or even better, some pictures of amusing mex-electrical, send me a note at terry@electrical-online.com
If you're interested in our travel progress, catch up with the latest on Sandy's blog, at http://canusamextravels.blogspot.com/
Until next time!
Posted by Terry Peterman at 2:41 PM No comments:

In my Christmas greeting blog posting, I mentioned that in lieu of Christmas gifts to family and friends, we were planning to find some worthwhile charity to contribute to, or some needy family that could use some help. This proved to be a daunting task. Not that charity isn't needed in Mexico, because it is. However, the same can be said in my own hometown in Canada, or anywhere for that matter. We first planned to give some toys or gifts to a children's charity in Puerto Penasco. We read up a bit on that, and what we found is that they don't need toys, bikes, or clothes, as they have warehouses full of these items from well-meaning people that are all thinking the same way. What they need most in most cases is food, not toys. Arriving in Mexico only 1 day before Christmas meant that we missed out on the normal Christmas charities anyway, so on to the next idea. I was hoping that something would become obvious to me, and began thinking that if I could find a need by getting to know different people that we would get to know over our stay in Mexico, then I would find a way to help them out in a more personal way. My biggest fear was that we would give a cash gift to a needy family, and then find them all wearing brand new i-pods, and not putting some food on the table. We spent a lot of time on the beach in Bucerias, and we always parked ourselves in the same general area. This area was always occupied by an elderly beach vendor by the name of Marcellino. He was unique in that instead of treading up and down the beach, he took advantage of the constant parade of people taking the long stroll up and down this beautiful stretch. He would set up under an umbrella, sit in his chair, with his wares spread out on a blanket in front of him. I thought it was a great strategy, and we got to know him quite well over the time we spent there. My friend Gary would always help him carry his stuff up to his car at the end of the day, and he appreciated this very much, and considered our whole group as his friends as a result. Gary and I had my family bring down a mega-phone to help him get his sales pitch message out the the customers walking by. I had purchased an inflatable boat that got a lot of negative attention on Sandy's blog, but to the Mexicans, this boat was envied to a large extent. One day Marcellino expressed his interest in the boat, and how useful it would be for him to have a boat like that for him and his son to go out fishing in. Viola! I decided then that I would give him the boat at the conclusion of our time in Bucerias. He was thrilled, and wanted to give me all kinds of merchandise in exchange, but I convinced him that I wanted to give it to him as a gift, and we settled on a few T-shirts and a hat or two in exchange. 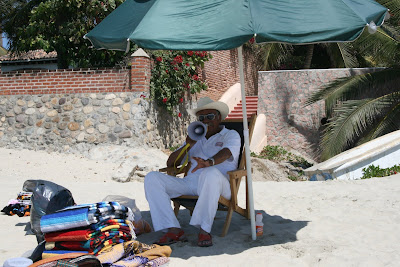 In our little campground, the owner had a guy hired to look after the grounds on a casual basis. His name was Francisco. This guy worked construction by day, and part-time at a convenience store, and washed and waxed R.V.'s, and the gardening on the side. A very hard-working guy, and when I asked him when he rests, he replied: "I can't, I have 3 kids and a wife"! He explained that the construction job paid very well by Mexican standards, but the job was just about done. He was hoping to find another job when it ended. Well, it ended while we were there, and because the global recession was starting to affect things in this area too, he was out of work. The worry showed on Francisco's face. I wanted to do something for him, and when he told me his daughter was sick, and he couldn't afford to pay the doctor, I decided to help him out in some way. I was going to hire him to clean the motor home, the car, etc., and pay him in advance so he could pay the doctor, but before I could do that, Jim, the campground owner came to see him and gave him a 6 month advance on his pay to get him through this tough time. I hired Francisco to clean the car, and wash the motor home before we headed out. I payed him over double what he wanted, and bought a kilo of fresh shrimp for him and is family to cook for dinner, and gave him a voucher for a trip out on a day cruise on the "Santa Maria", a catamaran trip around the Bay area, with all food and beverage included, for him and his wife to enjoy. Francisco was very happy, and hopefully they will take advantage of the trip as I'm sure they never had the time or the money to do something like this in the past.Small gestures, but 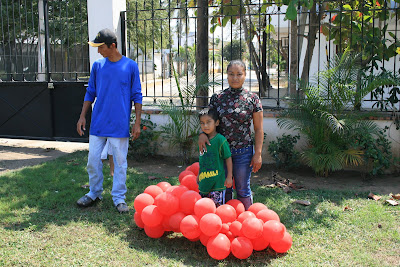 I hope that my family and friends will feel good about what we did for these individuals instead of getting some gifts that they would appreciate, but likely not really need.
Posted by Terry Peterman at 11:40 AM No comments: