Recently I was able to check out the new edition of the Basics of Household Wiring DVD, so I will share my review of the product with you, our Clients and followers of my blog and our website at http://www.electrical-online.com/ 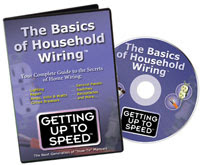 We have endorsed this product for a number of years now, but the most recent edition includes about 30 minutes of additional information, including 3 and 4-way switches, light fixtures, etc.
Sandy and I had the pleasure of meeting with the producers of the DVD during our last stay in the Phoenix area, and it was nice to put faces to the names of the people that we have worked with via e-mail and telephone calls over the last several years.
I have always considered this an excellent resource and we have sold many copies of the DVD and have received only positive reviews from our customers and clients. This new edition is just that much better with the additional information provided. The intent of providing an educational over-view of the home electrical systems and components for the novice or the DIY’er has been achieved. The DVD provides excellent descriptions, and easy to understand dynamic graphics and pictures.
The DVD is also very careful to emphasise the dangers of electricity, and the importance of safety and following the proper safe work practices before working on your homes electrical system, and any applicable process that must be followed, such as permits.
Before tackling any home electrical project, we at Electrical-online.com strongly recommend that you get a copy of the DVD, and watch it from start to finish. It is 86 minutes of time well spent. Click on the link below to get your copy today!

Posted by Terry Peterman at 11:56 AM No comments:

Kudos from a former Contractor!

In my last post I talked about installing the pool light for our built in spa addition to the backyard pool in Arizona. After taking possession of our new house on December 8, and moving in on December 16, 2009, we wanted to get started on the back yard as soon as possible. 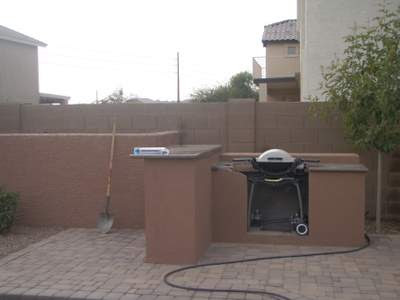 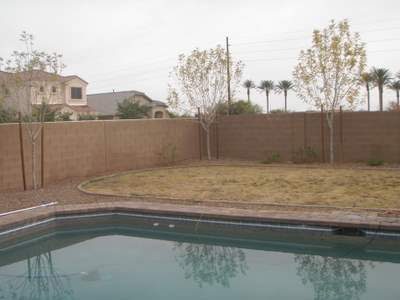 We met with a landscaping contractor in early December to open discussion on some changes we would like to see in our back yard. Nothing major, but the discussion was around designing a more tropical theme, and getting rid of some real grass to reduce ongoing maintenance requirements.

Also knowing that our time in Arizona will be in the fall and winter, we wanted to have our pool heated to allow us to actually use it rather than just look at it during the months that we will be there. Most of pools in the area are not heated (in fact some install chiller units) and only are used in the spring and summer months.

Another factor for Sandy and I was the almost mandatory requirement of having a hot tub or spa for the chilly desert nights. We've haven't been without one in all of our time together (16 years) and I even have a portable spa that comes with us on our travels, so to us this was an essential addition that needed to happen as well.

All this being said, it was decided that the best plan was to remove the grassy area and replace some of it with artificial turf, incorporating a golf putting green, adding some palm trees, fix up the existing outdoor cooking / bar area, and instead of an above ground portable hot tub, we would build in a spa in the corner of the pool and tie it in to the existing pool plumbing and at the same time install and connect a pool heater to the entire system.

For me this meant that I needed to connect all the new equipment (spa jet pump, pool heater, landscape lighting, power for the cooking area, new spa light), and modifying the control strategy to make this all work. The renovations happened so fast and efficiently that unfortunately I didn't have time to document and film or take photo's of the electrical component of this project as it would have made a great article for the website! With my parents visiting as well, I barely had time to get the work done to keep the project on course.

Anyhow, the point of this posting is to commend Chris, Kevin, and the entire crew on a job well done, in a timely, efficient manner, and most impressive, on budget!

Work began on the morning of December 21, with Christmas looming large at the end of the week. By the end of day 1, the grass was removed, the putting green was laid down, the hole for the spa was dug, and the dirt and sod that they piled on the street was hauled away and the street was swept up. 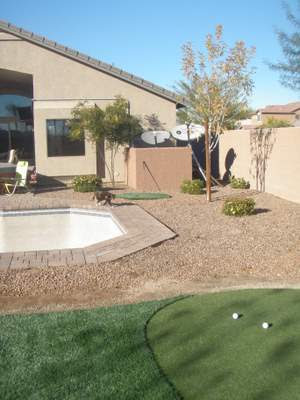 The second day of work included installation of the re bar cage for the spa and preparation for the plumbing. The next day saw the completion of the plumbing including connection of the spa jet pump, the pool heater, and a pressure test to check the new plumbing for leaks. 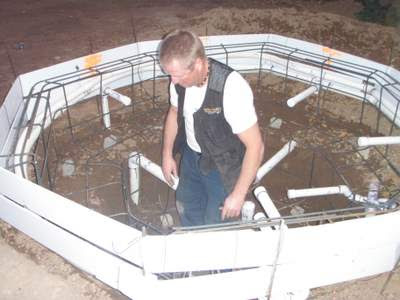 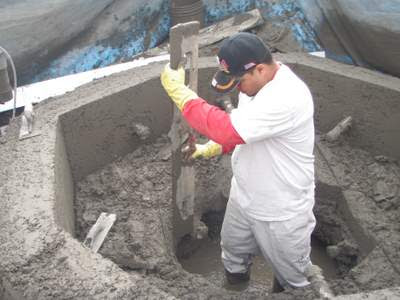 My point is that the project moved forward incredibly fast, and considering that Christmas and New Years Holidays were in this time period as well, the entire project was done and complete and we were swimming in the pool and enjoying the new-look back yard by January 15, 2010. 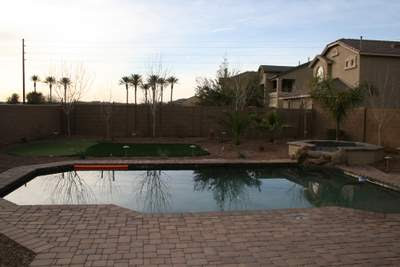 My hat is off to Chris, Kevin, and the entire crew of sub-contractors for a job well done. Not only did I discover a great resource for any landscaping or pool maintenance / installation needs, I also gained some new good friends! I would, will, and have recommended these guys to anybody in need some work of this type done for them in the Valley area! Feel free to e-mail my if you would like more details or contact information for these guys.

Anyhow, I am starting to embrace the social networking component of the Internet, and we're trying to integrate everything so they work together for our followers of http://www.electrical-online.com/ I have established an account with twitter, so you can follow my tweets at www.twitter.com/intelectrician I have a link on the blog to keep you updated as well. Until next time...;