I realize that this post isn’t related to my expertise as a the Internet Electrician, but it’s something that I believe my readers can benefit from, so please forgive me for this, but I’m just trying to help out here, and maybe save you a few bucks!Most of us are law-abiding citizens, and I would never be an advocate for breaking the laws of the land, be it a minor misdemeanour, or criminal in nature. However, I do take issue with the cash grab that municipalities like to call photo-radar. I try to keep my speed within normally accepted tolerance levels, but I don’t pay as much attention to the posted limit as I do to keeping up with the flow of traffic. To me, if the posted limit is 60 MPH, and most of the traffic is travelling at 75 MPH, to drive at the speed limit in these conditions is more of a hazard than going with the flow. This is my opinion only, of course.Here is one of my own personal experiences with photo-radar.
Several years ago, Sandy’s Father was in the Hospital in Edmonton Alberta, and we live about a 2 hour drive south of there. We were on our way to Edmonton for a visit one day, and I got caught by an officer with a radar gun for speeding. I hadn’t had a ticket in several years, so I reluctantly accepted the consequences, knowing that I was probably lucky that I haven’t been ticketed more often over the years. After receiving the ticket carrying on our way, I set my cruise control at the posted limit (maybe slightly above), just so as to not get stopped again. When we got the City, I lowered my speed to the flow of traffic, and being a freeway, although now inside the City, I assumed the limit was likely 60 MPH, judging by the flow of the traffic. Feeling quite proud of myself for being a model, law-abiding citizen, we got our visit in, and returned home later that day.

To our surprise, a few days later I receive another speeding ticket via photo-radar from the City of Edmonton. As it turns out, the posted limit was only 50 MPH and thus I’m mailed yet another ticket for $125, adding to the $75 ticket from Police Officer earlier that day. Two tickets within an hour of each other, costing me an extra $200 over the normal expenses related to the trip. Thus began my distaste of photo-radar.

There are many products available on the market today, designed to foil the photo-radar system. Most are plastic plate covers that by various methods, are thought to blur or obscure the image of the plate number that the camera captures, adding some degree of doubt that the ticket will reach the rightful registered owner of the car. All of these devices are quite easy to spot from behind the vehicle. Many States or Provinces now have legislation drafted to combat these devices and are worded as such that the vehicle plate must be free of any obstruction, and be visible at all times. With these visible plastic covers, the vehicle will likely get pulled over and the driver will be asked to remove them, or given a ticket for obstructing the license plate.

A new product has reached the market, and it is designed to break the backdraft that exists behind most vehicles that causes dust, mud, snow or ice to accumulate, thus obstructing the plate. This helps the vehicle owner to comply with the legislation that exists that says the plate must be visible, clean, and easy to see. One possible additional benefit to this device is that it just may block the last digit of the plate number from showing up clearly on the photo-radar generated speeding ticket. That’s because the camera angle that photo-radar operates on is about a 22 ½ degree angle from the rear right hand side of the vehicle. Nice touch. The product has been tested in practical conditions, and it works as designed. Notice how you cannot see the device when approaching the vehicle from the rear, and the licence plate is clear and unobstructed. 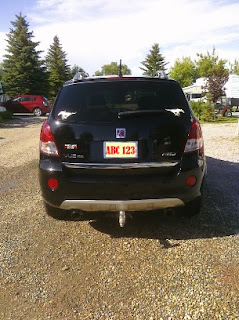 Now look what happens when the picture is taken from the position of the photo-radar camera. 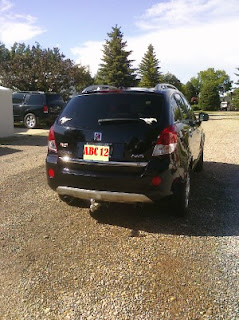 Notice that the last digit of the plate is not captured, thus making it impossible to send out a ticket to the vehicles registered owner.They are made from a flexible and nearly unbreakable black plastic, and are paintable to match the exterior of the vehicle. The mounting plate is pre-drilled with mounting holes to match all standard licence plate designs, in North America, Europe, Australia, and more. 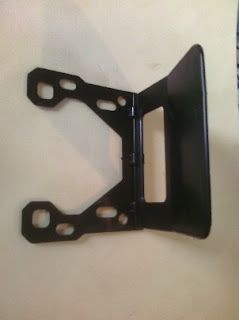 They also work on the smaller plates for motor cycles. 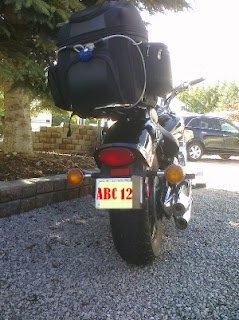 These special devices are now available for sale on our website for the low price of $25 (plus S & H). Really quite a bargain considering that they function as designed to keep your plate clean and unobstructed, and just might save you the nice little surprise that arrives by mail for too many of us un-suspecting, generally law-abiding citizens.

Click here to get yours today!
Posted by Terry Peterman at 1:18 PM No comments: